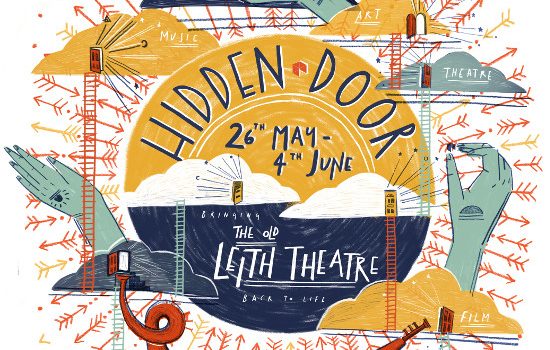 Returning for its fourth edition, the non-profit and 100% volunteer-run multi arts festival will this year take place in the old Leith Theatre; with 10 days and nights of music, theatre, visual art, film and spoken word bringing the stunning venue back to life. Left derelict and decaying for 28 years, Hidden Door will provide the initial spark to get this art deco gem back up and running as a major Edinburgh arts venue and transform its empty spaces with the help of some of the best creative talent from Scotland and beyond.

The festival will be free to explore every day until 6pm, with tickets now on sale for the evening events.

Kicking off with two nights of live music in collaboration with The List are Scottish Album of the Year (SAY) award winner Anna Meredith, dance/electro duo Bossy Love, alt-pop duo Bdy_Prts and Marnie (of Ladytron) on Friday 26 May and Scottish indie legends Idlewild with indie-pop from Hamish Hawk and alt-rock trio Dama Scout on Saturday 27 May. The final weekend brings more multi-instrumentalist mayhem with Hidden Orchestra headlining Saturday 3 June and we close the festival on Sunday 4 June with a fantastic and unique collaboration between Hidden Door favourites Tinderbox Orchestra on stage with another cherished SAY Award winner, Kathryn Joseph. Influential theatre company Grid Iron will premiere a brand new work in progress whilst Ludens Ensemble return with new performance ‘Love’ based on Shakespeare’s Sonnets. Jamie and Lewis Wardrop’s Glasgow v. Edinburgh will utilise irreverent and playful multimedia as they rip up the postcard view of their cities.

Over 20 artists have been selected from an open call to exhibit at Hidden Door 2017 alongside 11 invited artists. They will transform every corner of the old Leith Theatre, working in a variety of mediums including sculpture, sound, performance art and video. Using the Japanese method of kintsugi, Valerie Reed will gild some of the damaged parts of the theatre by filling in the cracks with gold.

David House will present a sonic document marking the Leith Theatre’s melancholy-yet-beautiful state of disrepair, whilst hinting at the heritage and future of the building. Continuing his preoccupation with ideas of abandonment in society, Liam J. McLaughlin’s video work will explore the influence of religion and isolation on rural communities. Mo Kearsley and Martin Elden will present an unnerving commentary on social media’s pervasiveness by projecting images of eyes glued to the technology on the theatre’s floor.

The Film programme is once again on a cinematic scale with a glittering line-up of collaborations and guest curators including Edinburgh Short Film Festival, Africa In Motion, Scottish Queer International Film Festival and Kino Klub. Interrobang will draw upon the theatre for storytelling inspiration for their Phantom of the Opera-themed “Ghosts of the Citadel”. New Writers Award winner Rachel Plummer joins Matt Hulse, Matt Rogers and the Scottish Clarinet Quartet to present a the electronica-inspired, cabaret-style “Parlour Guide To Exo-Politics,” and Annie Rutherford and Rebecca DeWald will curate an event showcasing a range of writers and translators who use the act of translation innovatively in their writing and performance work. Returning to Hidden Door, Andrew Blair’s ode to Robert Pattinson, “The R Patz Facts” is sure to be wildly popular, as will Sonnet Youth’s spoken word house party/rave.

“Edinburgh is a city busy with festivals but Hidden Door opens up new spaces for artists and creative talent to bring something new to the mix, celebrating innovation and experimentation in the arts.

“People may think that Edinburgh doesn’t have a lot of disused buildings, but they would be amazed at the secrets that are still there to be discovered. This year we have access to one of Edinburgh’s best kept secrets – the old Leith Theatre. Many people think they have been to the Leith Theatre, but have in fact only been to the adjoining hall. The actual theatre is breathtaking, and we will fill every nook and cranny, backstage room, under the stage and even the roof space with exciting art installations, theatre shows and film from some of Scotland’s most promising new artists.

“And then of course we have the fantastic main auditorium which we will bring to life in a spectacular way – with music from the likes of Hidden Orchestra and new enfant terrible Anna Meredith, plus fantastic new theatre productions by Grid Iron, Ludens Ensemble and Surge. This will be our most ambitious festival yet, and will reflect a dynamic emerging cultural scene in Scotland.”

“It’s terrific to see a pop-up counter culture event like Hidden Door collaborating with Leith Theatre to open up the whole of the building, not just the main auditorium but also all the corridors and dressing rooms, bars and secret nooks that make it such a charming and exciting place. Hidden Door gives audiences the chance to glimpse what the future of the theatre could be and show others how versatile and interesting it can be in the meantime through its programme and use of space. I’m excited to see a like-minded organisation coming together with us and bringing Leith Theatre new life.”

Lorna Duguid, Multi-artform Manager at Creative Scotland, one of the festival’s supporters, said:

“Hidden Door Festival has provided inspiration to communities across Scotland, showing that there is still life in disused spaces and with a little rejuvenation they can thrive as temporary arts venues.

“The festival has established itself as a springboard for emerging Scotland-based artists, across several art-forms, encouraging them to create ambitious new work and developing their practices.

“Hidden Door has once again produced an excitingly ambitious programme and we can’t wait to see the historic Leith Theatre provide the perfect backdrop for this year’s festival.”

“We’re really chuffed to be working with Hidden Door this year as they bring the amazing Leith Theatre back to life. Anna Meredith – who topped The List Hot 100 in 2016 – is one of the best and most innovative musicians in the UK today, and we’re very excited that she’ll be headlining the Hidden Door Opening Party with The List. We are also really excited to have Idlewild headline on Saturday night as this is likely to be one of their only UK shows in 2017.”

“We’re thrilled about our collaboration with Hidden Door Festival. This is a great opportunity to present four exciting groups in a new context, and to a new audience. We’re always looking to produce memorable events and we expect the special programme and the special venue to create one of the stand out moments of our year – and a wonderful taster for our 2017 Festival.”